The Philippine President has this evening declared "a state of national calamity" in an attempt to speed up the relief efforts following Super Typhoon Haiyan.

In a statement, President Benigno Aquino confirmed that a “state of national calamity” had been declared across the municipality, with the provinces of Leyte and Samar (indicated right) suffering the worst of the destruction and loss of life.

The category 5 Super Typhoon Haiyan, which struck the Philippines on Friday, was the highest intensity for a Pacific cyclone, the NOAA noted in a press release on Thursday. Driven by the warm waters of the western Pacific, which were in excess of 30ºC, the tropical cyclone struck the eastern islands of the Philippines; it was one of, if not, the strongest Typhoons to ever affect the region, and the strongest of the 2013 season. Gusts of 235mph and sustained winds of 195mph brought devastation to many low-lying coastal communities. The most powerful Typhoon to hit the Philippines in history was Typhoon Reming, which struck in November 2006. According to the World Meteorological Organisation (WMO), gusts exceed 198mph and sustained winds in the region of 119mph. The most expensive storm in Philippines history came in December of 2012 when Typhoon Bopha killed more than 1,900 people at an estimated economic cost of US$1 billion. Even those who had survived the strongest of Haiyan’s winds battled against the 5m storm surge which inundated towns and villages, sweeping people out to sea.

The towns of Guiuan and Basey, both in the Samar province, are thought to be largely destroyed, 300 now confirmed dead. Tacloban, in the Leyte province, has largely been flattened, leaving thousands homeless. Some towns have been reported to have suffered “up to 90%” damage; the UN have confirmed that the 35,000 populous city of Baco, in Oriental Mindoro province “was 80% under water” when UN officials arrived over the weekend.

There’s an awful lot of casualties, a lot of people dead all over the place, a lot of destruction – Richard Gordon (Head of the Philippine Red Cross) said in an interview to the BBC. 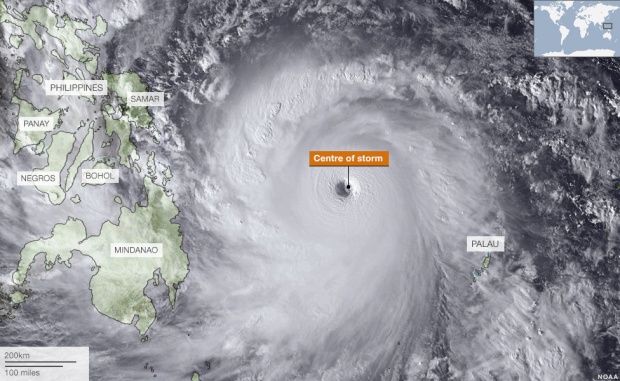 A full international relief effort is currently under-way in the country, overseen by Interior Secretary Mar Roxas and the Philippine Government. The UN, with the Unites States and Britain have pledged financial support, among many others, to aid the ongoing relief effort. BBC are tonight reporting that the US Defence Secretary Chuck Hagel has delivered helicopters,fixed-wing aircraft and search and rescue teams to the worst affected regions. The UK Rapid Response Facility is set to provide €8m in funding for the relief effort. UK Prime Minister David Cameron is expected to make a formal announcement later this evening, he has already telephoned Philippine Prime Minster offering his support.

From a helicopter, you can see the extent of devastation. From the shore and moving a kilometre inland, there are no structures standing. It was like a tsunami – Mar Roxas (Philippine Interior Secretary)

The storm comes as the climate change community meets in Warsaw, Poland at the 19th Conference of Parties (COP19), an annual meeting of the United Nations Framework Convention on Climate Change (UNFCCC). Today’s opening exchanges saw the Philippines’ Climate Change Commissioner, Yeb Sano, break down in tears and pledge to fast for the duration of the two week summit unless a deal was put in place to tackle the threats of climate change. The Philippines is one the most exposed countries in the world and is expected to be heavily impacted by the effects of climate change.

The climate negotiations in Warsaw, Poland, are an important step in delivering a fair, ambitious, binding global climate deal by 2015 – SE Asian correspondant